It’s the most active betting day of the year. What better way to spend it than risking $0 to win $1K? Get your picks in for the Action 247 Big Game Challenge for a chance at a $1,000 payout. Read on below before you lock in your predictions.

-Will Jimmy Garoppolo Throw an Interception?

Before you get your picks in for Action 247’s Big Game Challenge, here are some key facts to keep in mind for Super Bowl LIV:

There you have it. It’s up to you to cash in now. Enter the free-to-play Big Game Challenge for your shot at $1,000. 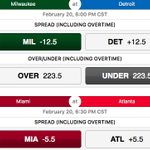